Include a Charity is a social change movement of Fundraising Institute Australia. We are a collaboration of over 90 charities in Australia. We cover a broad spectrum of causes in the community, from medical research and education, to the environment, animal and family welfare, to the arts and more.

On average, 160,000 Australians over the age of 65 pass away annually, with 92 per cent having a valid Will and plans for their estate accounting for approximately $700 million.

By working together, we can change charitable giving forever so that over time, gifts in Wills become the norm for many rather than just a few. 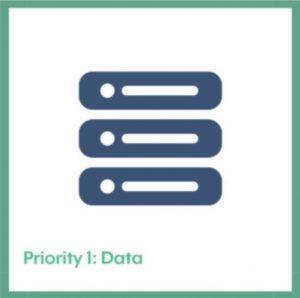 As in the broader fundraising sector, the need for data in the area of gifts in Wills income is becoming increasingly important in forming and making the argument for legislative changes that help create sustainable funding streams, especially during a challenging environment now and into the future.

While these priorities don’t require legislative change; this is an initial step in normalising the discussion and creating debate around the importance of gifts in Wills to achieve long-term success in sustainability for this vital channel. To that end, FIA and Include a Charity will work closely with the ACNC and other relevant bodies and key stakeholders on crafting solutions for reporting charitable bequests. By working together, we will be able to understand the
gross number of charitable bequests separate to the total number of fundraising donations in Australia. 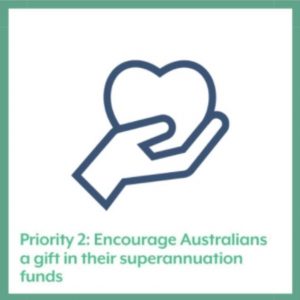 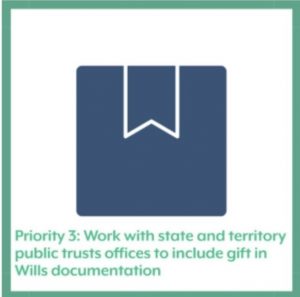 FIA will work with state and territory public trusts offices around Australia to get charitable gifts offered as an option within all Will documentation.

Include a Charity Campaign Director